Activities of the Imam and the Noorani family.
Post Reply
157 posts

One of France’s most renowned châteaux is facing an uncertain future after the Aga Khan announced the dissolution of the organisation he created to save it from ruin.

The spiritual leader of the world’s 15 million Ismaili Shia Muslims said he would wind up the foundation which has restored the Château de Chantilly, about 30 miles northeast of Paris, five years earlier than scheduled.

The 83-year-old billionaire, who lives on a nearby estate, has given no public explanation but is understood to consider that he has spent enough money, time and energy rescuing the château. With the hard-pressed French state unable to pay for its upkeep, administrators have embarked on an urgent search for alternative sources of finance.
Top

In his message, Prince Aga Khan wished for lasting peace and prosperity in Afghanistan, adding that at this historic juncture, the Ismaili Imamate and the Aga Khan Development Network continue to live up to their commitment to working together with the Government of Afghanistan and their efforts to help the Afghan people, pursue a peaceful future with economic growth, social progress and a better quality of life.
Top


Dr. Mwinyi has assured the Aga Khan leadership that it will adhere to good rules to attract investors.

In his remarks, President Dr. Hussein said that the government he is leading will ensure that it invests in local and foreign investors who aim to invest in Zanzibar in various sectors including tourism, industry and others. He emphasized that the Government of Zanzibar's Phase Seven is now focused on driving and growing the economy. blue by making full use of marine-related resources, including activities related to the tourism industry, oil and gas exploration and extraction, fisheries and high seas, fish farming and processing, seaweed farming and more.

Thus, he added that such efforts require effective strategies to ensure the goals achieved by the Government are met and that is why the Government has deliberately decided to ensure it creates a better environment for investors. Hussein used the occasion to welcome the Institute, which has a long history in partnering with Zanzibar in strengthening and developing various development sectors including the tourism sector as well as social services such as education and health.

Along with that, President Dr. Hussein Mwinyi commended the Institute for investing in the country in the tourism sector as well as assisting in strengthening social services including education, health where the measures have brought productivity to the people of Zanzibar. Hussein said that the Aga Khan Institute has a lot of experience in Zanzibar and the Government will continue to develop such long-term relationships and cooperation with a view to bringing development to Zanzibar.

Along with that, President Dr. Hussein told the delegation that the Government has deliberately decided to build the capacity and help the people at the grassroots level, so it is good that the projects that will be designed by the Institute will target the people here in Zanzibar. Hussein Mwinyi expressed his gratitude and congratulations to the world's leading Aga Khan leader, His Excellency Karim Aga Khan, who is also the spiritual leader of the Shia Ismaili Islamic sect by congratulating him on his victory in the last general election in the country.

President Dr. Hussein congratulated His Excellency Karim Aga Khan and assured him that the Government of the United Republic of Tanzania, including Zanzibar, will continue the good and long-term partnership between him and the Institute as it appreciates and recognizes the significant contribution made by the Institute in various sectors.

Earlier the Resident Representative of the Aga Khan Institute Amin Kurji congratulated the president Dr. Hussein Mwinyi for the great victory he won in the last General Election and promised him that the Institute will continue to support the Revolutionary Government of Zanzibar and its people. Hussein Mwinyi that the Aga Khan Institute has been in partnership with Zanzibar for a long time and has been supporting the Revolutionary Government of Zanzibar in various projects.

She added that since the signing of the memorandum of understanding between the Revolutionary Government of Zanzibar and the Institute in 1988 where history shows that her grandfather the Aga Khan founded the first school in East Africa for women here in Zanzibar in 1905.

The leader also told President Dr. Hussein's various projects initiated by the Institute in the country including the strengthening of the Old City of Zanzibar in support of its General Plan in 1994 and later entering the "World Heritage" through UNESCO.

However, the leader expressed the Institute's intention to continue providing social services as it has done in the past including strengthening the religious and secular education sector while providing scholarships for higher education by joining. Aga Khan University (AKU) University of Dar-es Salaam, where the Institute has been supporting.

He also described the various steps taken by the Institute in strengthening the Government Institutions (NGOs) in 1999 while explaining how the Institute was involved in strengthening tourism by building the Serena Hotel in Zanzibar's Old Town, renovating it. Forodhani garden, renovated the “Old Dispensary” building and other Stone Town buildings.

The Aga Khan Foundation, which funded the conservation project to protect the historical area of the Stone Town and which is famous for tourism and cultural interactions, pulled out its support to the Zanzibar government over poor relations between the two sides in 2012.

Less then 3 months after he was sworn in as President by Zanzibar's Chief Justice Omar Othman Makungu , Hussein Ali Mwinyi, a doctor by profession and former minister for defense sent a warm Letter of invitation to H.H. The Aga Khan. The text of the invitation is as follow:

Peace and Allah’s Mercy and Blessings be upon you,

May it please your Highness,

On behalf of the Revolutionary Government of Zanzibar, I am delighted to extend to you my very best greetings and most sincere wishes for continued health, happiness, success and to express my deepest affection and highest esteem to you and the Ismaili Imamat.

I take this wonderful opportunity to accept your congratulatory message and express to Your Highness my desire to acknowledge the excellent historic bonds that exist between the Ismaili Imamat and the people of Zanzibar.

My Government recognises your strong values and selfless commitment to improving the quality of life of all peoples, that has earned you the respect and admiration of the citizens of Zanzibar and throughout the world.
I welcome your interest and the Ismail Imamat and its institutions in working with the Revolutionary Government of Zanzibar in key areas of cooperation which include Economic and Investment, Heritage and social development.

I extend to your Highness a warm welcome to visit Zanzibar.
Accept Your Highness, and Dear Brother, the assurances of my highest support of your endeavors in Zanzibar.

I wish Your Highness continued success in your noble efforts.

2021, June 6: The Aga Khan's horse Saiydabad ran at Chantilly and came fourth in the race. The Aga Khan and his daughter Zahra attended the event. 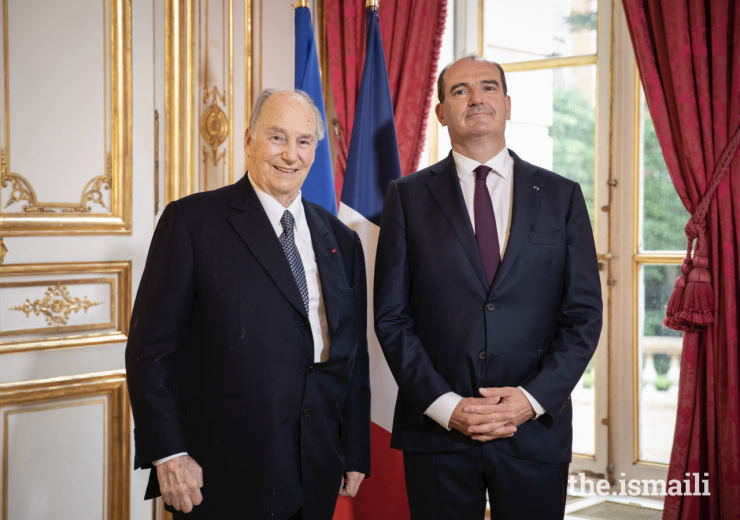 Mawlana Hazar Imam and Prince Rahim were received at the Hotel de Matignon for a meeting with French Prime Minister Jean Castex earlier today, to discuss areas of collaboration between the French government and the Aga Khan Development Network.

Mawlana Hazar Imam and our institutions enjoy an important relationship with France, which has included, amongst other dimensions, partnerships in many innovative socio-economic and cultural development projects in Asia and Africa.

Shamir Samdjee, President of the Ismaili Council for France, observed that the Prime Minister’s invitation “provided an opportunity to explore new areas of cooperation in the decades-long relationship.”

2021, July 13: The Aga Khan and Prince Rahim were received at the Hotel de Matignon for a meeting with French Prime Minister Jean Castex. They discussed international issues, the situation of Islam in France and the common projjects between the Ismaili Imamat and the French Government. My dear President and Members,

The recent events in Gorno-Badakshan are of deep concern to me and come at a time of increased fragility in the region. I wish you to inform my Jamat, as I have indicated in the past, that it is of utmost importance to understand that the disturbances are not directed at the Jamat nor at the general population of Eastern Tajikistan. It is therefore critical that my Jamat remains calm and acts in a peaceful manner as the government addresses the situation through its appropriate agencies.

I have always advised my Jamat to remain true to our tradition of respecting the law of the land in which they live. My Jamat globally, including in Tajikistan, has a tradition of responsible conduct at all times, particularly in facing crises, and I wish that my spiritual children of Tajikistan should continue in this tradition and also support the authorities in restoring peace and order.

I reiterate my farman to my Jamat to reject any form of violence, disorder, illegal activity, or other actions which are contrary to the laws of the land. I especially advise members of my Tajik Jamat, wherever they live, not to engage in any activities that might impede the restoration of peace and good order.

My Jamat should avoid relying on rumours and speculation and they should not spread information through any channels including on social media which may be interpreted erroneously, as that can create confusion and result in damaging consequences. My Jamat should comfortably rely on information provided by the Jamati institutions.

It is of utmost importance that the Jamat should remain united, including with those amongst whom you live and, at all times, support each other in improving the quality of your lives. The AKDN agencies have been active in Tajikistan for several decades and I have directed that their activities must continue during this time of fragility.

I will continue to watch the present developments, as I do at all times, and will send further guidance and direction as required.

I send to all my beloved spiritual children of Tajikistan my best loving blessings for mushkil-asan, and for safety and security.